skip to main | skip to sidebar

yeah I know my dates are not in order, but thats ok. These photos i want to share are from the storm on the 23rd December 2012. Yes nearly thought the Myans had been out by 1 day, but i knew better. Anyway to the photos.

The photo below was taken while still light and was pretty much a fluke. I had just been snapping away, as you can't take long exposure photos during the day. I tried that and you just end up with a white screen. Any way I circled the lightning strike to make it easier for you to see. 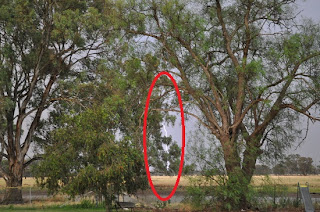 So once it got darker and i could set up my tripod and set the camera to a 4 second exposure these are the shots I got. 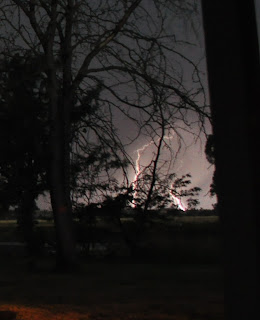 Yes it is still night time, you can see the light from the window on the grass near the garden bed. There were some huge flashes during this shot and in the circle you can see a clear strike. 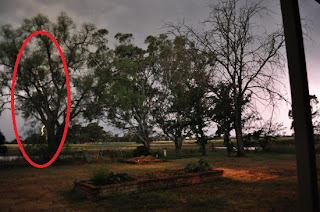 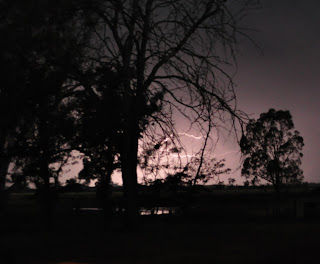 The trees in the back yard make it hard to get good shots, so I discovered the front verandah. I can get a clearer shot, just the lightning has to be in the right spot. 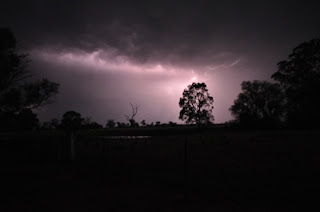 So this time I headed around to the front, my biggest problem today was the little midge bugs we have started to attack me, so I had to call it quits before the storm had moved past enough to get some good shots. But I managed to get some. Here a few of the better ones. I'm going to put all of them in a mini film as i think it would come up awesome watching the cloud move past, but that will have to wait for another day. 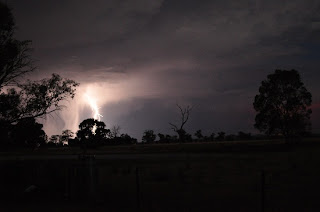 The next series of shots are all in a row and it is of a car that drove past. I thought the photos came up ok. What do you think? 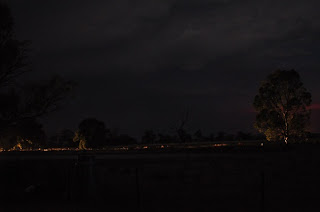 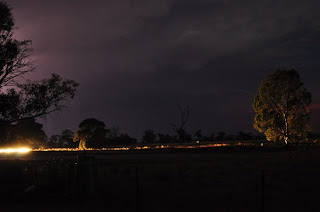 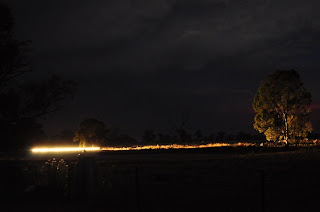 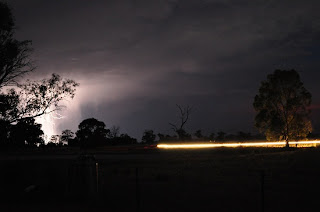 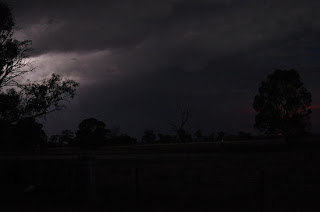 I know there wasn't much lightning, but I thought it was cool the effect of a longer exposure. Any way hope you enjoyed looking at them.
Posted by Bec at 8:58 AM No comments:

"For he will order his angels to protect you wherever you go." Psalm 91:11

What a great promise we have. A couple of nights ago I was reminded of God's love when I was able to take some photos of a passing storm which produced a beautiful rainbow. 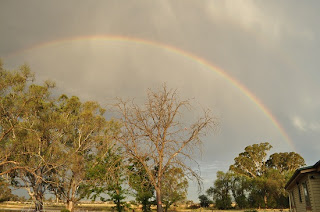 God had just taken Noah and his family through the worst storm ever, and promised that there would not be another like it.

Storms are still bad and scary, maybe they only last a couple of minutes, but it is great to know that when they hit we have angels watching over us.

Last night was a scary 10 minutes.

Miss E had been put to bed at 9 and so the rest of family sat down to watch "War Horse". The landlords dog kept barking out side, so I gave her some water and she sat happily at the back door. More barking started this time with her running away. Normally the landlords dont leave their dogs at work so we thought it a bit strange that she was there.

After the 3rd time we decided that we had better call the landlord to check that everything was ok. This was when we discovered that a storm was coming. Having called the landlord he said he would come and collect his dog and take her home. She was probably upset about the storm.

They came and collected her with winds raging around us. Dust was filling the air and we waited while the landlord checked their silos as we had heard some crashing and bashing.

Its very hard to see things at about 10:30pm. We don't have street lights out here. Everything must have been fine as the landlord gave us a toot and drove out the drive way.

We continuted on watching the movie for only about 10 minutes, when the wailing of the wind caught our attention. Windows started to shake as the noise of the wind grew louder and louder. Mr J tried to open a door to have a look but the pressure of the wind was too great. We could hear things hitting the windows in the back room, so moved everyone into the front of the house and told them to stay there, as we knew we had a dead tree in the back yard.

The noise subsided, the winds died down. Mr J went out the house through the garage to check out side. Sure enough the once faithful shade giver had fallen. I never really understood a storm coming to a complete stop before, until last night, as that is what it was like. As quick as it came, it was gone. The stars where out shining like nothing had happened at all.
This morning before the sun gets too much heat in it, I went to survey and take photos. 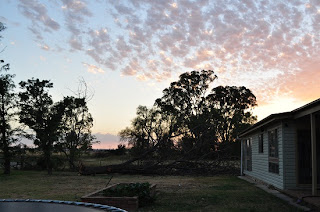 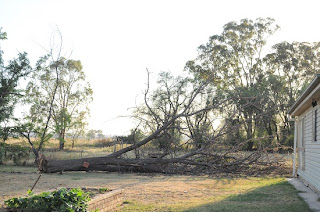 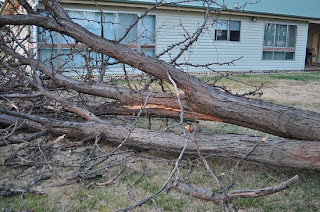 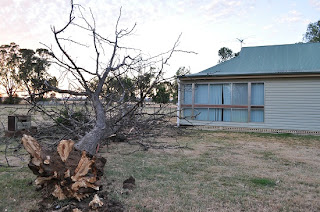 How truly blessed we are. No damage to the house. The only fatalaty might be the watermelon and rockmelon vines that are now sitting under the tree over near the fence. But I'm not calling that yet, they may have survived.

There was a few other branches down as well. 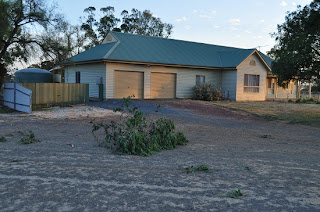 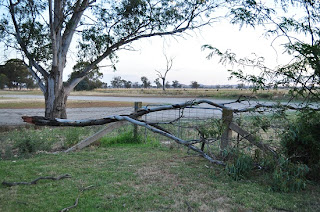 All I can say is "Thank You God" for giving us angels to watch over us. 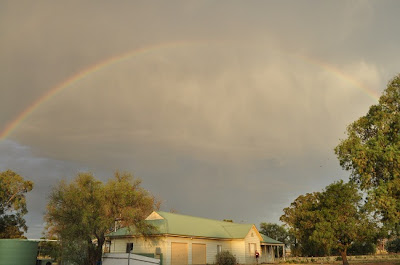 Bec
NSW, Australia
Back to homeschool we go. Juggling the education of Miss E, casual work and everything else that life throws my way.